2 أكتوبر 2012, 10:04 م
Purest and purest of the world’s rivers
River Virzaska in Switzerland: the purest and purest of the world where rivers from which you can see the bottom of the river clearly
River purity and transparency of the crystal so that he can see the bottom of the river through the clear waters at a depth of 15 meters, it is “River Virzaska \ Verzasca River” in Switzerland, purity water of this river, which runs its length is 30 km made him a rallying point for amateur photographers and professionals from all around the world
Taking pictures mostly be on the bridge that connects both sides of the river or from the top of the mountain that surrounds the river and but one Almusurien professional has for the first time taking pictures of the river bed after diving with his camera to the depths, says photographer Claudio Jasarula Claudio Gazzaroli, 38-year-old
That the waters of the river astonishingly pure and that he had visited the place for more than two hundred times the intensity of its beauty and has highlighting the beauty for the first time by capturing images of the bridge and the surrounding mountains to the river from Hall
Beside the clear waters The river also Beskhorh features colored glowing and vibrant. This river was hurt in “Lake Maggiore \ Lake Maggiore” where the dam is located Virzaska and is one of the most important platforms to jump rope in the world
Ranging river water temperature between 7-10 degrees Celsius and is one of the best-known dive sites in the period between the late spring to early fall 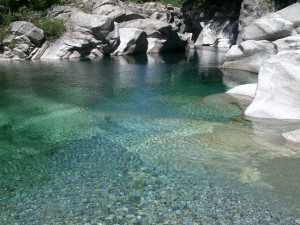 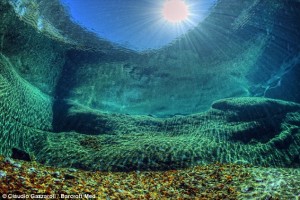